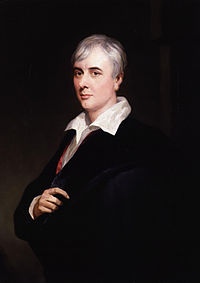 George Borrow was born at East Dereham, Norfolk, the son of Army recruiting officer Thomas Borrow (1758–1824) and farmer's daughter Ann Perfrement (1772–1858). He was educated at the Royal High School of Edinburgh and Norwich Grammar School. He studied law, but languages and literature became his main interests. In 1825, Borrow began his first major European journey, walking in France and Germany. Over the next few years he visited Russia, Portugal, Spain and Morocco, acquainting himself with the people and languages of the various countries he visited. After his marriage on 23 April 1840, he settled in Lowestoft, Suffolk, but continued to travel both inside and outside the UK.

"Wild Wales" recounts Borrow's personal experiences and insights while touring Wales alone on foot after a family holiday in Llangollen in 1854, and has come to be regarded as a source of useful information about the social and geographical history of the country at that time. It has been described as "robust, dramatic and cheerful", and the author as "an agreeably eccentric, larger-than-life, jovial man whose laughter rings all through the book".

He decribes his visit to Chester and his stay at the Pied Bull:

Borrow is often what might nowadays be called "politically incorrect" - but he is still fun to read.