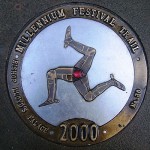 This building is on the Millennium festival trail. 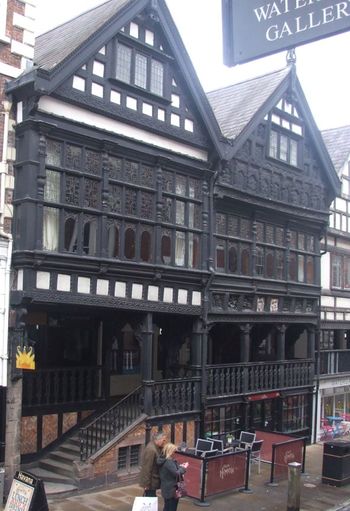 "Bishop Lloyd's House" (2014) after "restoration" by Lockwood. Note the changes to the windows and the staircase, and the increase in height.

Bishop Lloyd's House (or Bishop Lloyd's Palace) is at 41 Watergate Street, and 51/53 Watergate Row, Chester, Cheshire, England. It is designated by English Heritage as a Grade I listed building. The architectural historian Nikolaus Pevsner considered it to be "perhaps the best" house in Chester.

Prior to his arrival in Chester as Bishop Lloyd in 1605, George Lloyd was "Bishop of Sodor and Mann", hence the Manx symbol on the front of that building.

George Lloyd was born in 1560/1 at Bryn Euryn, Llandrillo-yn-Rhos in Denbighshire. He was educated at the King’s School, Chester and at Jesus College and Magdalene College, Cambridge, where he became a doctor of divinity (and where he seems to have gone under the name Floyd/Fludd). In 1594 Lloyd was elected to the divinity lectureship in Chester cathedral, and three years later became rector of Heswall, Cheshire. He became bishop of Sodor and Man in 1599, and then bishop of Chester in 1604. His brother David was mayor of Chester 1593, another brother Edward was a mercer, also in Chester. He had a further brother, Rowland. Lloyd has interesting ancestry his father, Meredith ap John, was of descent from Griffith, youngest son of Ednyfed Vychan, by his second wife, Gwenllian, daughter to Rhys ap Griffith, Prince of South Wales. She was widow to Conan ap Rodri ap Owen Gwynedd.

The Stanley's (of Stanley Palace) were also associated with the Isle of Man and the title of the "Lord of Mann" was the subject of a succession dispute between the daughters of Ferdinando Stanley, 5th Earl of Derby and Ferdinando Stanley's brother, William Stanley in 1594-1607.

Attentive to his administrative duties and moderate with both Puritans and Roman Catholics, he was a skilful preacher, admired by Henry, Prince of Wales and Earl of Chester. In Chester, he reversed the anti-Puritan and anti recusant policy of his predecessor Richard Vaughan.

Lloyd died on the 1st August 1615 and was buried in Chester cathedral. His epitaph there read (as translated from the latin):

George Lloyd's daughter Anne's first husband was Thomas Yale, whose son David was father of Elihu Yale, after whom Yale University in the USA was named (more money was donated by Jeremiah Dummer, but "Dummer College" does not sound as good). After Thomas Yale's death Anne married Theophilus Eaton another noted colonial American. 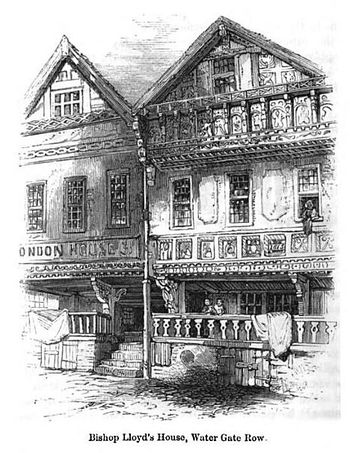 "Bishop Lloyd's House" prior to "restoration" by Lockwood as portrayed in Hughes (1856) the image is based on an engraving by Prout.

Seacome writes of it as follows:

The latin inscription has been translated as: "As it appears without, so it is within". Hemingway (1831) describes the building thus (simply copying his description wholesale from Batenham (1827): 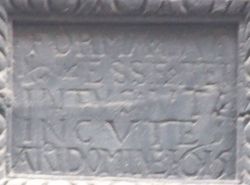 Hughes writing in 1858 gives a little more detail, and gets quite carried away in religious fervor and is quite out of character in his attack on earlier "Guide-makers": 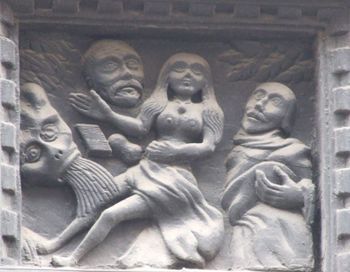 The panel on Bishop Lloyd's House which Hughes says there is so much confusion over and which has been variously interpreted as "Immaculate Conception", "Flight into Egypt" or "Susannah and the Elders".

Whatever the correct interpretation of the panels should be it is curious to note the parallels between the images used here and the "mockery-Tudor" employed in Bridge Street. A possible alternative interpretation is that the two rightmost panels are not from biblical sources but from other traditions, such as being the story of Queen Dido.

If the 1615 date on the panel is correct and represents the date that whatever building works had been done were completed, then Bishop Lloyd, who died an "untimely death" in August of that same year may have not lived here for long, if at all. In fact, there is no evidence that Bishop Lloyd or any of his family actually moved in and (according som some sources who give no reference) by 1616 "Sir John and Lady Bowyer" were known to have been living there. However, the exact identity of these members of the Bowyer family is also uncertain. The only contemporary candidates would be Sir William Bowyer (c.1588–1641 and not his father, Sir John) of Knypersley in Staffordshire, a wealthy mine owner who had been elected MP for Staffordshire in 1614, but he was not knighted until 1617, and no evidence has so been found of a connection with Chester at this date.

Hughes also notes the graffiti that had been scratched into virtually every window of the building (the windows were replaced by Lockwood - so none of this is visible today). The inscriptions included: "Oh that my pencil could could the features trace, of him I think possessed of every grace - S Pollard", "Robert Duff October 16th 1853" and others going back to 1722. Graffiti included that by "Watkin Williams Win Mayor of Chester 1727". 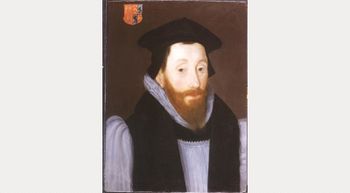 The only known portrait of Bishop Lloyd, now in the Grosvenor Museum.

The front gable displays an abundance of 17thC carving including the Legs of Man (for the bishopric), three horses heads (for the Lloyd family) and the arm of James I (1603-1625). There are also the biblical scenes and heraldic beasts (including an elephant and castle).

Inside, the two undercrofts have walls of red sandstone rubble, with brick barrel vaults added in the 18th century. Leading from the row level to the third storey is a Chinese Chippendale staircase. The larger room on Row +1 level has an ornate 17th-century plaster ceiling and a massive fireplace. The ceiling is almost identical to that at Tudor House in Bridge Street, and is believed to be from the same artisan and to have been made in-situ. 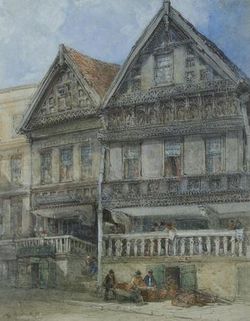 A smaller room also has a plaster ceiling, less ornate than in the other room, which includes as motifs Tudor roses, horses, and starfish. Around the smaller room is a vigorous frieze depicting pairs of sea-monsters, open mouthed with lolling tongues. Again, there is an identical work elsewhere, this time above the fireplace at Row + 1 level of 10 Watergate Street. In this room is a smaller fireplace in the over-mantle of which is a carving of Cupid riding on a lion which demonstrates a fairly hazy understanding of classicism. It is clear this fireplace has been moved from elsewhere as the over-mantle is taller than the ceiling a small dome has been constructed to fit it in. The image of Cupid (or earlier Eros) riding a lion goes back to antiquity and has been found both in Roman mosaics and on Greek coins. The meaning of the symbolism is clear - "Love conquers all".

The ceilings in the eastern tenement were most likely moved from the Bishop's Palace in Abbey Square after this was damaged in the Civil War - in 1645/46. It is clear that the designs have been cut down to fit. That in the eastern street chamber has a complex design with angel heads at the interstices of concentric ovals. A ceiling using the same moulds existed in the library of the Old Bishops Palace and a similar ceiling exists over the chancel of the chapel of St Anselm (formerly the private chapel of the Bishop).

Given the re-use of materials associated with the Bishop's Palace it does seem as if the house has a close connection with Bishop Lloyd, rather than, as some have suggested merely decorated with a memorial to him. However the time-scale is puzzling, as Lloyd died in 1615 and the damage to the Bishop's Palace occurred much later in 1645/46.

By the 19th century it had become run down, the carvings on its frontage had at times been covered with plaster, the house had been split into tenements, and it was becoming derelict. For a while in the 1880's it was the home to the "Palice Vaults" - with the bar at row level, a smoke room above and chickens kept in the loft. There was at one time a suggestion that the house should be moved to America, where the descendants of Bishop Lloyd had become eminent (in fact, it has been suggested that that Elihu Yale's gravestone was stolen years ago from Wrexham and is now displayed in a glass case in a room with purple walls, which belongs to a building belonging to Yale's "skull and bones" society). However, following the efforts of alderman Charles Brown and a public subscription the house was purchased by the corporation.

The buildings were extensively restored in the 1890s by T M Lockwood and again in the 1970's by the then Chester City Council. Lockwood replaced the eastern street entrance with a staircase and entry is now gained through the western tenement only. At row level, the brackets supporting the storey above are carved with bearded giants, beasts and an owl; there are also lighter brackets shaped as figures. Much of this bracketwork was moved around by Lockwood, who also replaced the 18thC sash windows with the mullioned and leaded windows seen today. Lockwood appears to have done the work in at least two stages, as surviving photographs show that the mullion windows were installed before the changes to the row staircase.

In 2004, there was a flurry of reports in the local press about the flat above Bishop Lloyd's House (owned by the City Council) being used as a "brothel".