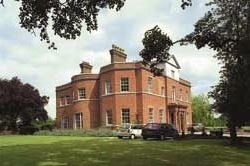 Bache Hall was the local manor house, demolished in the Civil War and later rebuilt.

The name "Bache" comes from a large tidal lagoon that was once linked to the River Dee at Blacon. The area, which now lies under Liverpool Road and a supermarket car park, was slowly reclaimed and raised when the course of the river was diverted in the 1730s. The Chester Canal also cut off the watercourse in the 1780s. Its course can be traced from Bache brook which is now partially covered by the Deva Link, a highways relief road. The seat of the manor was Bache Hall. Bache Pool was the site of the watermill which Richard of Avranches donated to the Abbey in or shortly before 1151. The pool existed since prehistoric times, but the millpond was allowed to silt after 1845 and finally filled-in around 1883. The Asylum, lying on land between Bache and Upton Halls, was established in 1829, its steady growth into the next century as a mental hospital continued until it had grown into a large general hospital: the Countess of Chester Hospital. Not only did the hospital buy Bache Hall in 1911 it has also expanded to absorb large portions of the Bache township into its complex. 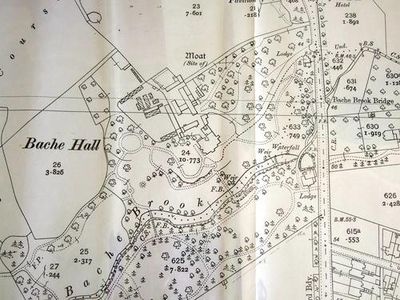 Bache Brook, a continuation of Flookersbrook still runs above the surface from the site of Bache Pool to the Parkgate road. Bache is generally referred to as "the Bache". The origins of the name could be "Batch" (a sandbank or patch of ground near a river), Bach (Teuton for a brook) or Bache (the Saxon denomination of a valley). Other possible meanings are a beach, strand or ford. The Bache Pool is mentioned several times "in the preambulatlon to the boundaries" of St. Oswald's from 1656. Randle Holme III noted:

Bache Brook ran into the Dee just under the Bache and a large portion of the Bache land was presumably once the actual river beach.

The current Bache Hall, built in the early 18th century as a gentleman's estate continued in that form until 1902 when for 10 years it became Chester Golf Club with a 9-hole course. It is now used by Chester University. The grounds used the natural features of a valley with Bache Brook draining an adjoining pool. The Hall, situated on a gentle rise, looked over pleasant gardens, well planted with trees, a waterfall and bridges over the brook. Some of the grounds were lost in the 1980s due to road widening and then a major new road (Countess Way) was built which required landfill and culverting of the stream.

The first references to the various families who have held the manor start in the 13th century with several people with Bache as a surname. It is probable that they did represent the owners but that is not definite. But by the 14th century the manor was held by the Donecaster family who had obtained land from families in Upton during the reign of Edward II. The much respected Chantrell family came next and they held the manor from the Abbot and Convent of St Werburghs and after the reformation from the Dean and Chapter. 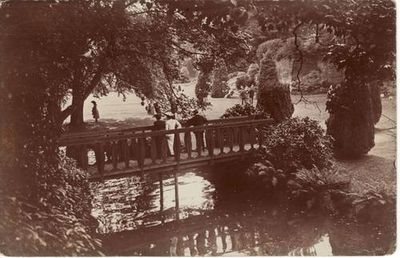 An old postcard showing the bridge over Bache Brook at Bache Hall.

In 1606 it was purchased by the unfortunate Edward Whitby. The property was rebuilt after the old house was demolished during the 1643 - 46 siege of Chester in the Civil War, when it was garrisoned by Parliamentary troops. Edward Whitby, who was recorder to the City at the time, was one of several who lost their houses this way around the periphery of the city. The older property is listed as having a Medieval moat, but there is no trace of it but the name Moat Field is recorded on the tithe map of 1844 (field No3, on tithe map). The site is now covered by modern houses.

From the Whitby's the estate passed partly by purchase and partly by marriage to the Cromptons. About 1716 the manor passed via an heiress of the Cromptons to the Morgans of Golden Grove in Flintshire (the same Morgan family as those of "Morgsn's Mount" on the City Walls), until they sold it to Samuel James Brodhurst of Chester. In April 1840 General Sir Charles James Napier was posted to Chester Castle with a force of cavalty and troops to quell possible "Chartist" riots. He initially tried to rent Bache Hall: 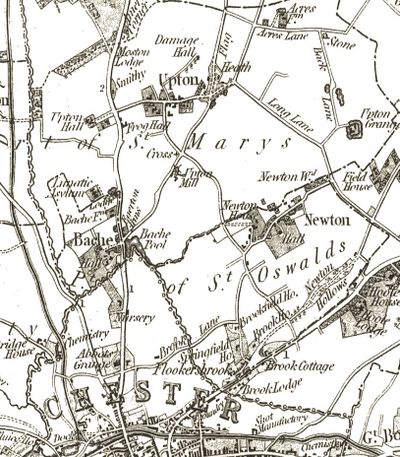 Bache (here shown in 1831) was once in a largely rural area. Bache Pool, filled by Flookersbrook once ran a mill.

..but did not succeed as he could not guarantee to rent for three years. The property descended successfully to various members of the Brodhurst family who as part of the will terms had to change their name from Jenks to Brodhurst (sometimes listed as Broadhurst). Hanshall writes:

In 1874 Samuel Broadhurst Hill sold the estate to the soap tycoon Robert Spear Hudson (see 1881 census return for Bache hall and Bache Cottage). R.S. Hudson founded Hudson's Soaps. A chemist and druggist, he first owned a small shop on High Street, West Bromwich, England. In 1837, he was experimenting with bars of soaps and started grinding them into a powder using a pestle and mortar. He sold this new "soap powder" in his shop. Initially the production line consisted solely of Hudson, but by 1854 he had hired ten female employees and by 1875, Hudson had opened a main factory at Bank Hall, Liverpool, England. This was conveniently close to his source of soap. The secret behind the success of Hudson's soap powder was that it offered convenience. Previously, women had been spending hours shaving and grinding the bars into their own flakes or powder. Hudson's product allowed them to save time and energy and they flocked to buy his merchandise. Hudson was joined in the business by his son Robert William who succeeded to the business on his father's death. In 1908 he sold the business to Lever Brothers who ran it as a subsidiary enterprise during which time the soap was manufactured at Crosfield's of Warrington. During this time trade names such as Rinso and Omo were introduced. The Hudson name was retained until 1935 when, during a period of rationalisation, the West Bromwich and Bank Hall works were closed.

After Hudson's sudden death in 1884 his widow, Emily, continued to live at the Hall until her death in 1901. The Hall and land was then tenanted by Major John Macgillicuddy who was one of the founders of the Bache Golf Club. Then in 1911 Bache Hall was bought by the nearby Asylum. It was used as a Nurses' Home for many years until 1939 when a Nurses’ Home was built in the grounds. By 2014 it was occupied by Chester University.