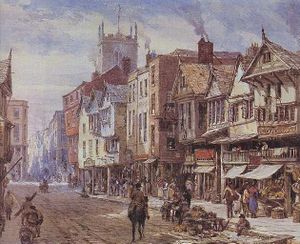 Louise Rayner was born in 1832 and died in 1924. She lived in Chester from some time around 1869 until 1910. Louise was born at Matlock Bath, Derbyshire and spent her early childhood there and in Derby. Her father Samuel Rayner (1806-79) was an accomplished painter of architectural watercolours, and her mother, brother and four sisters also artists. The family moved to London in 1842 and Louise took up watercolours seriously when she was fifteen, being taught by her parents and their artist friends. She began to exhibit oil paintings of interiors at the Royal Academy in 1852, and in 1860 her first watercolours of street scenes were shown at the Society of Women Artists and the Society of British Artists. The family moved to Brighton in 1858 but returned to London in the mid-1860s.

Louise Rayner is first recorded as living in Chester in 1869, when she was a boarder with Robert Shearing (who owned a chemist’s in Watergate Street) and his wife Mary Anne, at 2 Ash Grove off the Wrexham Road. From Chester she sent work to exhibitions in Liverpool, Manchester, Birmingham and London. In the 1870s and ’80s Louise spent a couple of months each summer in different British towns and cities. In the 1890s her sister Margaret came to lodge with her at Chester, where they taught water-colour drawing. They moved to Tunbridge Wells about 1910, and Louise sold her last drawing in 1918 at the age of 86. The Grosvenor Museum possesses over twenty of Louise Rayner's water-colours, the largest number in any single public collection.

Rayner is often criticized for "reusing" the same material, however close inspection of her works show that while she might have painted several works from the same viewpoint, she is careful (as shown on the right) to record the details that have changed in the intervening years. Another notable Rayner trait is moving buildings closer to the viewer. As she was very religious she has a particular tendency to move churches to more prominent positions. 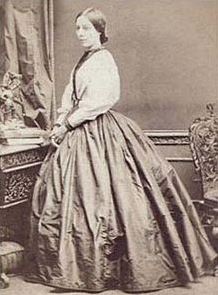 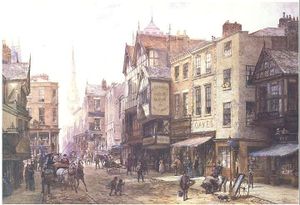 These habits are illustrated by the four images on the right. The first three are Rayner's water-colours of Eastgate Street looking toward present location of the High Cross, while the last is a modern photograph (January 2009). The following details are worth noting: 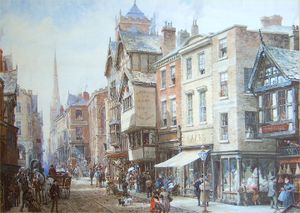 Some of the changes in architecture allow the water-colours to be dated: 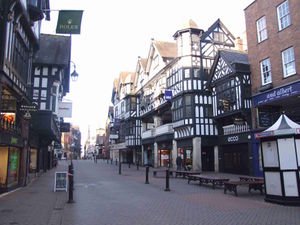 Some further images of Chester by Rayner can be found on the pages about the Old Queens Head.